For over 10 years, Executive Director of New Sanctuary Coalition & Immigrant Rights Activist, Ravi Ragbir has been training U.S. citizens how to accompany our Friends (non-citizens) facing or fighting deportation. 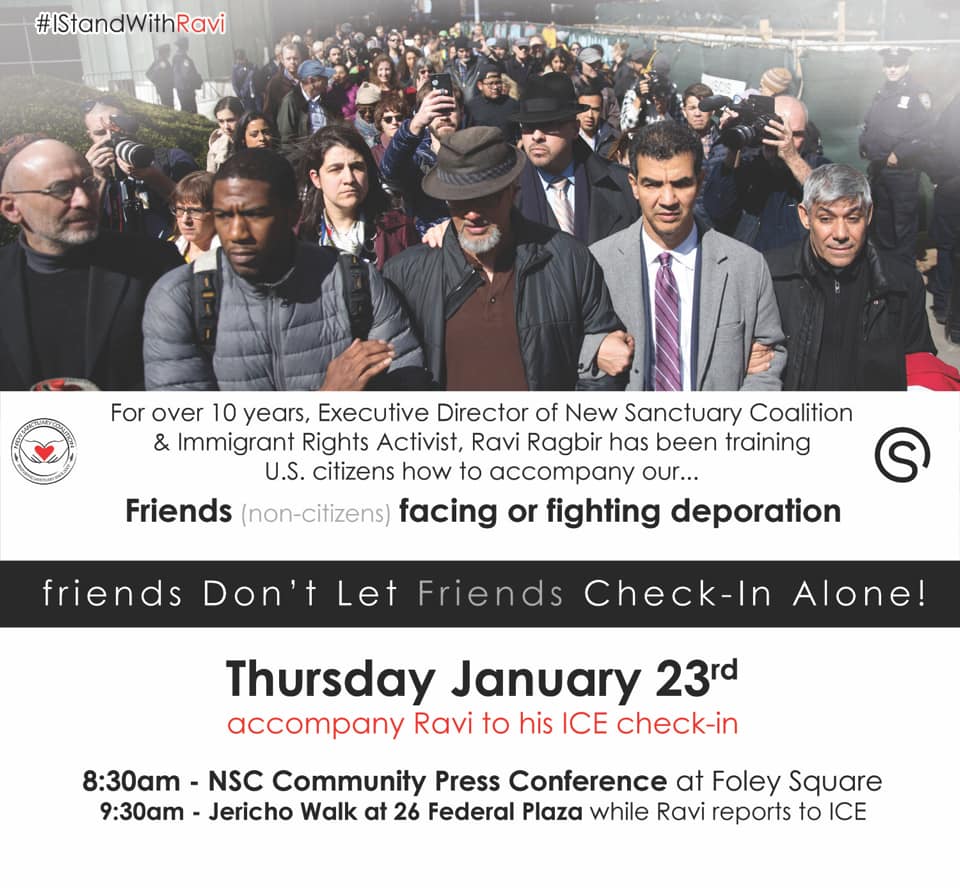 Accompaniment is a concrete way to extend sanctuary to the most vulnerable among us. Sanctuary is not a physical entity, but the spaces wherein all of us can breathe freely and in dignity. We are building a movement that cares and protects the other, not matter where they are from or who they are.

Faith leaders, immigration activists, and community members march in silence and pray outside 26 Federal Plaza in solidarity with individuals and families whose basic humanity is being denied by our unjust and immoral immigration system. Though we walk in silence, our actions speak to the injustices that our communities face. 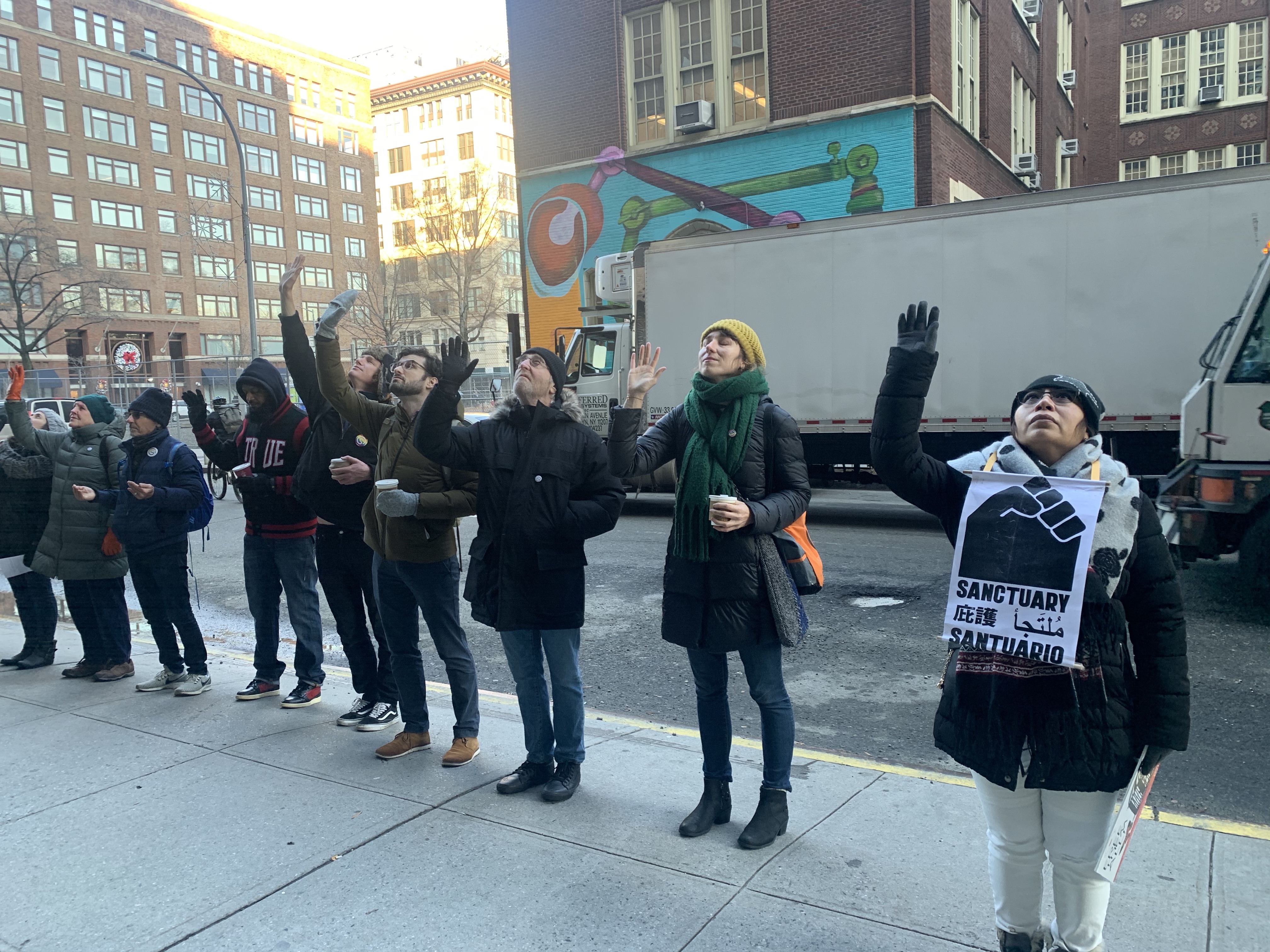 Drawing as Resistance is a powerful way to witness during accompaniment in immigration court. We are grateful to all of our volunteers and leaders who show up every day to shine a light on the cruel and unjust policies that are tearing families and lives apart. 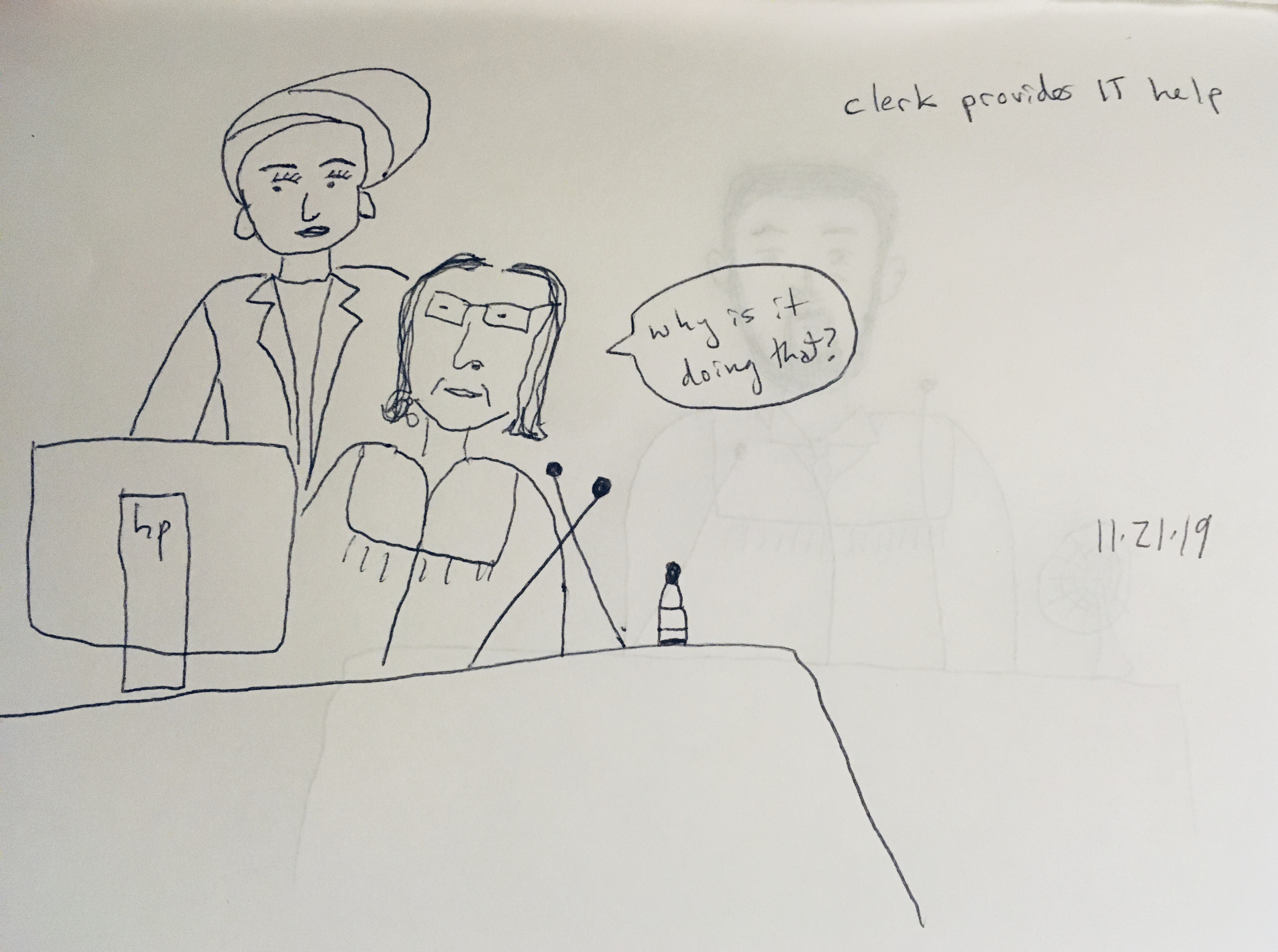 *Thanks to Sara Z for having an eye for the surreal in the mundane.*

{Some names are changed to protect our Friends.}

Thank you all for all you have done to contribute to the completion of 2,873 accompaniments over 261 working days in 2019. That's an average of 11 per day! This community amazes us every week, and we never cease to be humbled by your willingness to show up, even at the last minute, to support a neighbor.
We've had some incredible victories this year. Just last week, one detained Friend was granted asylum. One Friend who has been living in a walking jail with an ISAP ankle monitor for ten months finally had his ankle monitor removed unexpectedly and is able to run, walk, jump, and move through social spaces uninhibited and without unwelcome gazes of concern from strangers. And two Friends were granted bond and were able to reunite with their loved ones - including Victor, who had been separated from his wife and four growing children for almost three years. While we must pause to celebrate this incredible batch of good news, we must also recognize that many families are missing a loved one - or two, or many - from their holiday observations this year. While the work we do can be daunting, frustrating, upsetting, and heartbreaking, every effort's monumental significance crystallizes in meaning when children finally wake up to their parents. Sons reunite with their mothers and feel their embrace. Brothers have dinner together, laugh, talk. Sisters, cousins, are able to greet each other with hugs and kisses, hold each other. We want all of this for every family. -Ambien Mitchell Accompaniment Co-ordinator 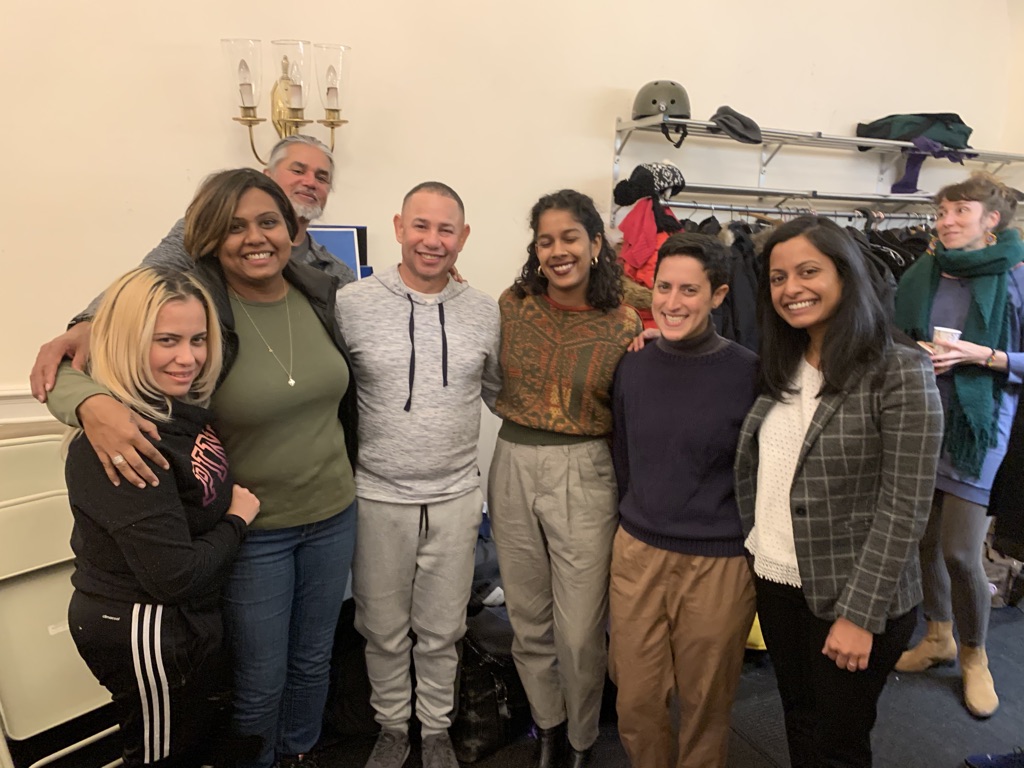 I never wanted to be a public figure. A lot of my training is teaching [supporters] how to speak for others. So, it was never my intent to be the face of this, but I am in a similar situation many people are in, and I am able to speak for them because a lot of them are terrified. They are living in fear and they break down. I break down a lot. People knew the change in administration would impact hard… I think they would have taken me away last year, but they weren't sure how to. In the last year, it became real for a lot of people. It became real for me and it became real for supporters along with me. Yes, I've been moved into the spotlight, but I'm using this moment to pull people from being protestors to really standing up. -Ravi Ragbir

“It is very clear to me that there has been some skirting of the law, that the free flow of the public has been obstructed arbitrarily and unilaterally to create a pressurized environment in which human rights could be violated.”
Representative Yvette Clarke

WHEN U.S. IMMIGRATION and Customs Enforcement attempted last year to deport Ravi Ragbir, an outspoken critic of the agency, it was motivated by a desire to retaliate against his criticism, according to a ruling by a panel of judges with the 2nd Circuit Court of Appeals released yesterday.

“Ragbir’s public expression of his criticism, and it's prominence, played a significant role in the recent attempts to remove him,” the ruling says. “The government’s retaliation was egregious.”

They're taping their windows, they're heading into the basement, they're locking their doors, they're not coming out, you know, for the next few days, just trying to weather this out. That's how terrified people are.

Silence is an important part of the Jericho Walk, which is as much ritual as protest. Started in 2012, it is open to people of any or no religion. The walkers imitate the Israelites’ capture of Jericho, the Canaanite city. According to Joshua in the Old Testament, the Israelites obeyed God’s instructions to circle the city walls without speaking, once each day for six days, then seven times on the seventh day. On the final day, Israelite priests blew their ram’s horns, Joshua’s people shouted, the city’s walls fell, and their army conquered Jericho.

This isn’t the first time ICE has arrested immigrant activists during check-ins. Agents arrested Ravi Ragbir, the executive director of the New Sanctuary Coalition, a New York City-based immigrant advocacy group, during a check-in last January. He was transferred to a detention center in Florida.

Neither Baltazar nor Ragbir attended their appointments alone: Both New Sanctuary and Adelante have accompaniment programs where volunteers go to check-ins with immigrants to provide emotional support and, in some cases, to be there when things go wrong.

After his arrest, Ragbir filed a lawsuit against ICE claiming the agency had targeted him for his activism, and an appeals court ultimately sided with him. The judge ruled that “public expression of his criticism, and its prominence, played a significant role in [ICE’s] recent attempts to remove him.” Ragbir has since been released from detention.

“For more than nine months, María, 23, has been waiting in an immigration detention center in Arizona hoping to reunite with the six-year-old niece she raised as a daughter. When the two asked for asylum at the border last March because they feared for their lives in Guatemala, border officials detained María in the Eloy detention center and sent the girl to foster care in New York, 2400 miles away.

After a federal judge in 2018 ordered most family separations to end, attorneys have been scrambling to reunite families. There are currently about 5,500 known cases of children separated from parents during the Trump administration. But no one has tracked how many children have been split from non-parent relatives, nor is there a formal mechanism for those families to reunify.”

Pelayo, 33, lives with her husband and two young children in Tucson, Arizona. Her parents brought her there from Mexico without documentation when she was 6. As a "Dreamer" who has been shielded from deportation since 2012 under the Deferred Action for Childhood Arrivals program, and who has stayed out of trouble with the law, Pelayo believed she was safe.
"I never thought they would reopen my case," she said. "I feel like I'm an American ... If they send me back to Mexico what are my kids going to do without me? What am I going to do without them?"

According to the U.S. Immigration Policy Center, one in four asylum seekers forced by the Trump administration to remain in Mexico encounters violence there. Yamiche Alcindor looks at the risks they face as they wait out their cases in places sometimes more dangerous than those they fled.

This holiday season, I’m thinking about togetherness. Solidarity. What it means to be there for each other in our darkest and brightest hours. And I’m thinking about our most basic New Sanctuary promise: no one who comes to us ever has to go it alone.

No Friend who comes to us has to stare down a cold-blooded ICE officer in a windowless room alone.

No Friend has to face a black-robed judge with a towering backlog of cases and the literal power of life and death over that Friend’s future alone.

No Friend has to walk through the metal detectors at 26 Federal Plaza alone, face another night in an overcrowded detention center alone, wait for news of their loved one’s possible deportation alone, prepare for ICE raids alone.

NSC can live up to that promise because of our tireless staff, our steadfast volunteers (more than 7,000 strong!), and because of individuals like you. Help us meet 2020’s challenges by becoming a monthly sustainer or making a personally significant year-end contribution today. 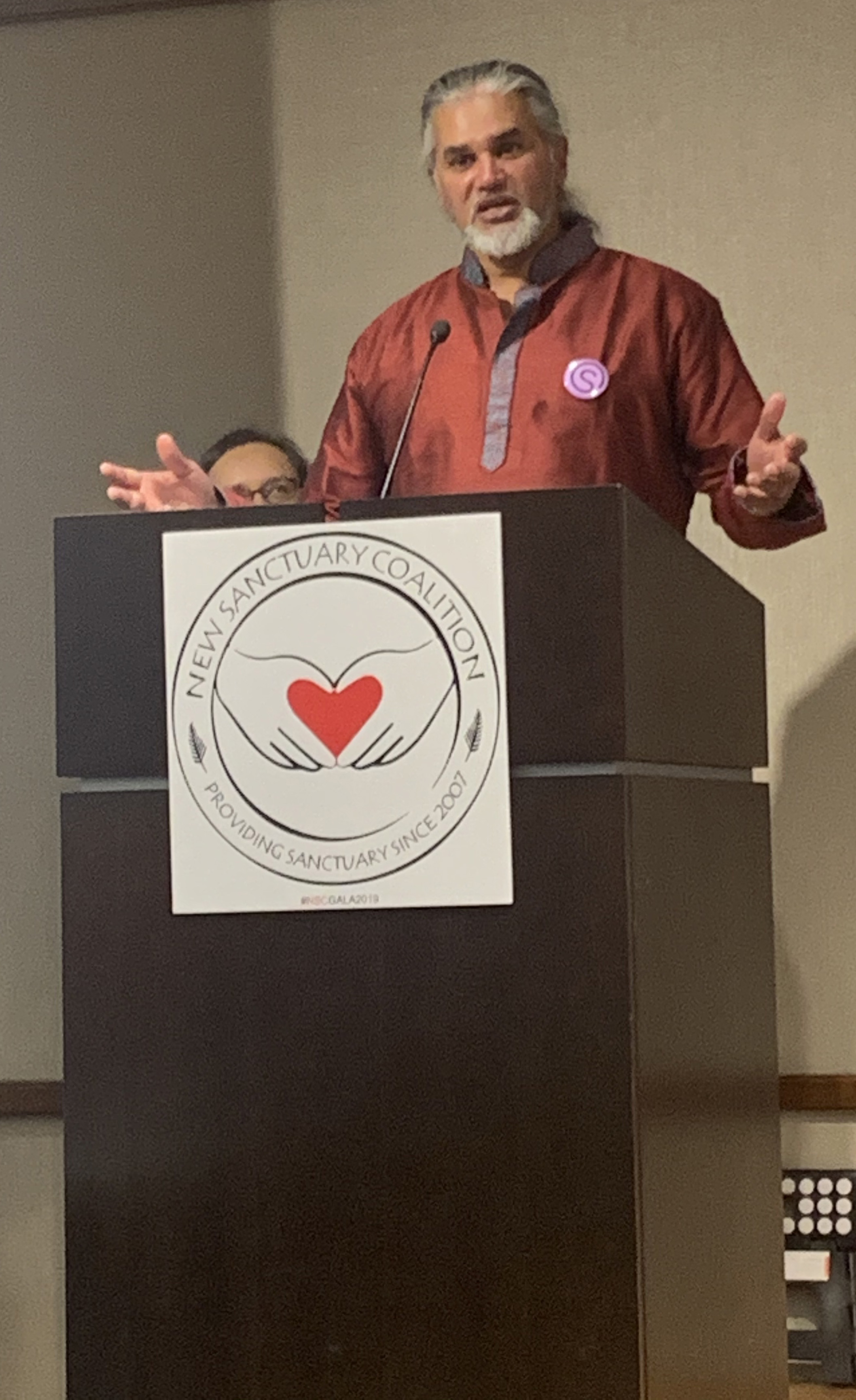 In the New Year, our continued goals are to knock down walls, destroy borders and put an end to immigration laws that devastate communities.

As we expand our programs and capacity in 2020, we will be more prepared to face the challenges that attempt to divide us.

We will shutdown ICE--put them out of jobs, then work on our next moves to strengthen impacted communities and restore dignity and humanity to all. 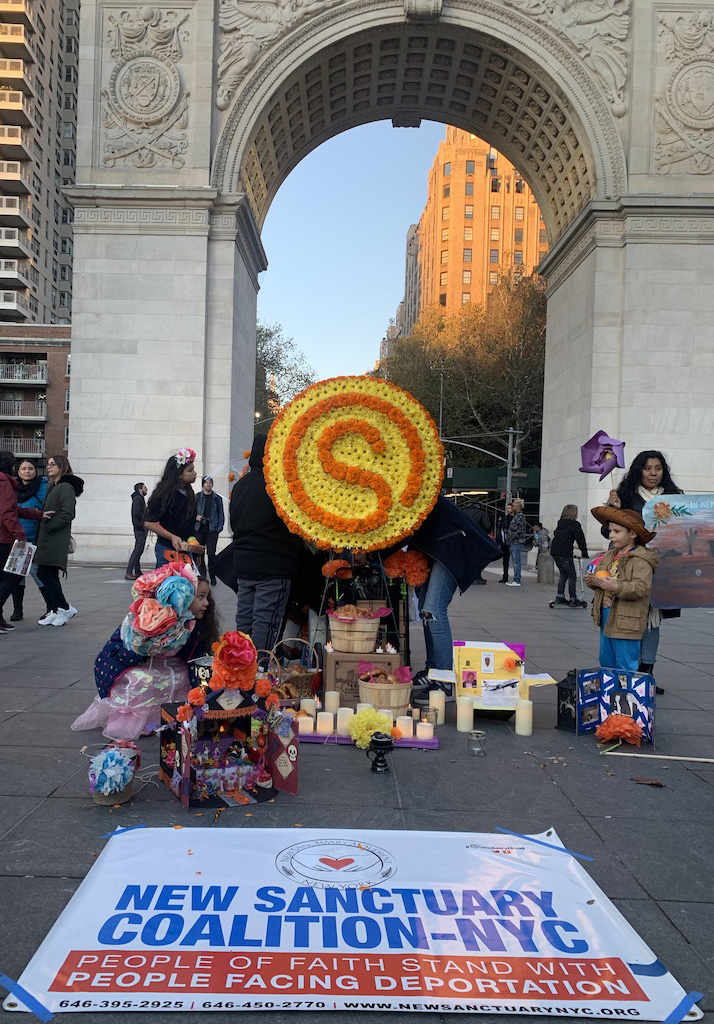