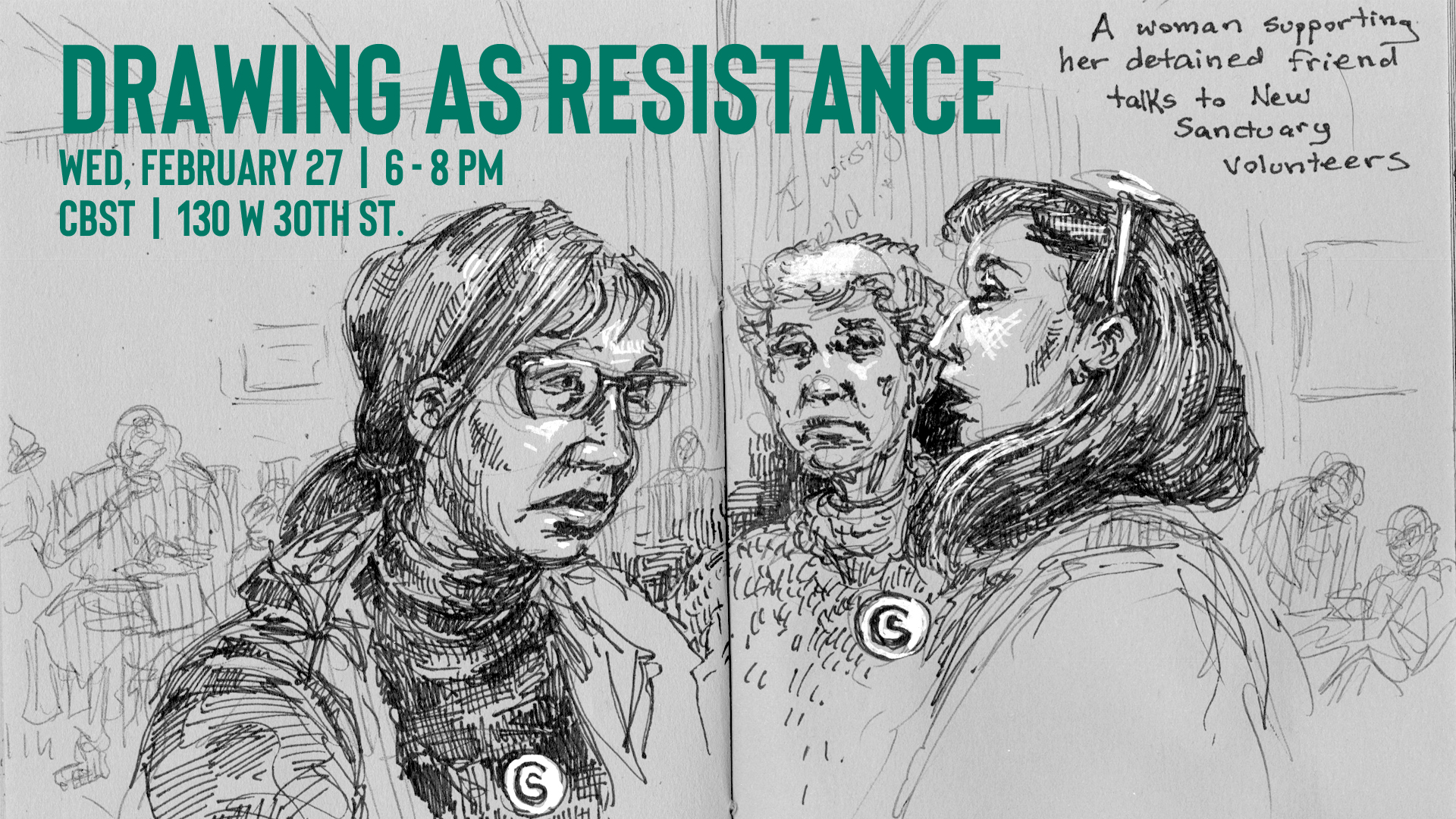 One of the functions of the New Sanctuary Coalition accompaniment program is to bear witness for our friends, and, to let those in power--immigration judges, ICE officers, and government attorneys know that we are watching and holding them accountable. “When photography is unavailable or inappropriate, drawing can act as witness, and produce subjective commentary on injustice. Often less explicit than photographs, drawings can prompt a more wide-ranging debate about miscarriages of justice and conflict, and act as tools to prompt social change.”--From the show, Graphic Witness

We are launching the, “Drawing as Resistance” program as a way for volunteers to not only observe, but to participate--by drawing as an act of resistance. The two-hour salon/teach-in will be led by artists, Molly Crabapple and Meryl Ranzer.

The program, open to those who have completed New Sanctuary Coalition's Accompaniment Training will begin with a brief history of courtroom sketch art and talks by each of the artists, followed by a Q&A roundtable and drawing workshop to give participants confidence to draw in the courtroom from whatever level they are at.

Molly Crabapple is an artist and writer in New York. She is the author of two books, Drawing Blood and Brothers of the Gun, (with Marwan Hisham). Her reportage has been published in the New York Times, New York Review of Books, The Paris Review, Vanity Fair, The Guardian, Rolling Stone, and elsewhere. She has been the recipient of a Yale Poynter Fellowship, a Front Page Award, and shortlisted for a Frontline Print Journalism Award. She is often asked to discuss her work chronicling the conflicts of the 21st Century, and has appeared on All In with Chris Hayes, Amanpour, NPR, BBC News, and more. Her art is in the permanent collections of the Museum of Modern Art, the United States Library of Congress and the New York Historical Society. She is currently the Spring 2019 artist in residence at NYU's Hagop Kevorkian Center for Near Eastern Studies.

Meryl Lynn Ranzer has been a visual and performance artist, designer, entrepreneur, and women’s rights activist all her life. She spoke up as a 9-year-old for the ratification of the ERA in 1972. Her heart and soul has been steeped in the work of feminism from the time she could pick up a pencil and make her first protest sign.
After graduating with honors from the School of Visual Arts in 1984, she began her illustrious career in fashion as a sportswear designer. She has been an instructor at Parsons, FIT, and Kent State University’s Fashion School.
As an artist, Meryl worked with Eve Ensler and Sally Fisher on the first V-Day in Madison Square Garden in 2001. Her work has been shown in NYC galleries, created well received feminist performance pieces, and has acted as co-curator in the group shows she participated in. Meryl is currently NSC's digital media manager.

Sorry, this event is full.
GET INVOLVED DONATE